I finally did manage to get the main Knitting Doctor blog up and running again. There are still bunches of old photos that need to be re-uploaded, but you'll find me blogging back here.

I have 5 repeats of the edging left on the mystery baby thing. 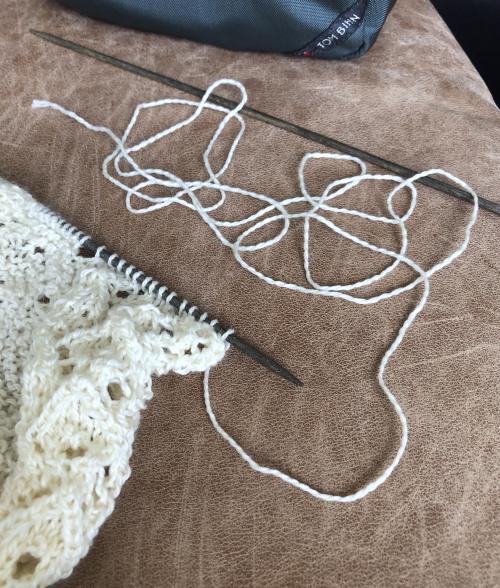 Fortunately, I have more of this yarn in the stash. I just was hoping that I wouldn’t need to wind up a whole hank of it for a few inches of edging. I’d forgotten how much I dislike typepad for blogging. I’m still hoping to get the wordpress installation up and running. I have a recent back up, but it needs a working wordpress blog to restore it to. For a few moments late last night I thought I had it fixed, but it wasn’t to be. I’m running out of swear words, so it’s on the back burner for the rest of the weekend. Have a good holiday weekend!

And here we are

I'm done with the old blog. I haven't been able to get anywhere with tech support for the old server, so I'm just starting here. If I can ever import the old posts, I'll do so, but right now I don't even care.

Here's a gratuitous yarn photo for you. 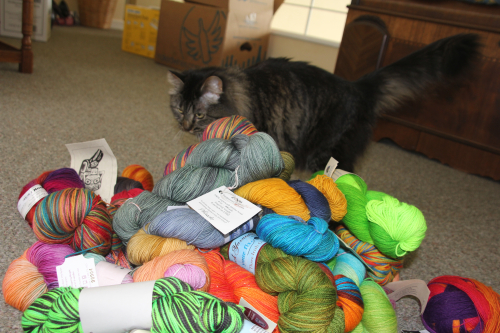 Don't even ask why I had that all hauled out. I was looking for something that I apparently misfiled in one of the eleventy-billion boxes of yarn in this house. I didn't find it, which is probably a good thing, since I'd have cast on yet another project. Right now I'm knitting baby surprises, which doesn't make for very good blog fodder.

This has been a wild several months. Work has been crazy, politics is making me nuts, and if I see one more crazy-assed post on Facebook about people not wearing masks, I might not be responsible for my actions. On top of everything else going on in the world, I decided to quit drinking back in late January. So if you came here for the whiskey/knitting screw-up posts, you are out of luck. It was getting to be more of a part of my life than I wanted it to be, so out it went. I can spend the wine and whiskey budget on something else.

I'm still on deck to retire as of the first of May next year. After the past few months, it can't come soon enough. As an internist, I primarily take care of a very geriatric patient mix, with many chronic medical problems. That has been very challenging since the vast majority of them have been terrified to set foot out of their homes since early March. "Virtual" medicine has some very real advantages, but it has the potential to trash the human doctor/patient relationship that I enjoy. There will be lots more changes in the next year as big systems and medical groups struggle to figure out how to negotiate this new world. I'm just glad that I only work three days a week. That does make it manageable.

And I lied up there. I do care about the missing decade-plus of my blog posts. I'll figure out a way to get them copied back, hopefully that won't mean uploading them one at a time. 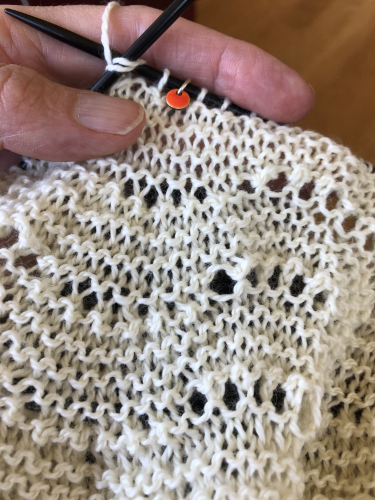 I've gone and done it. I've moved, lock, stock and barrel. I've been a little tired of my previous blog home for a while, and Typepad's latest goofiness with commenting was just the last straw.

So I've got new digs. Come on over and check it out. The move has been relatively painless, though not everything is over there just yet. This blog is paid up for a few months, so I won't delete it for awhile, but all new posts will be at the new house, assuming I can figure out how to post over there.

Make sure you update your feed readers! Currently my feed count at the new place is a big fat zero, which is a bit demoralizing!

See you over there...

Two nights ago a friend called and said he had a gift for us, and could he stop by. Of course I said yes. Who turns down gifts? A few minutes later he was at our front door, with a huge paper bag full of chanterelle mushrooms that someone had given him. He wanted to know if we wanted them, since he wasn't sure what to do with them.

A glass of wine later, we had the menu planned, and sent Greg to the market to get pork chops while John and I did a little prep work. Here's what we came up with. 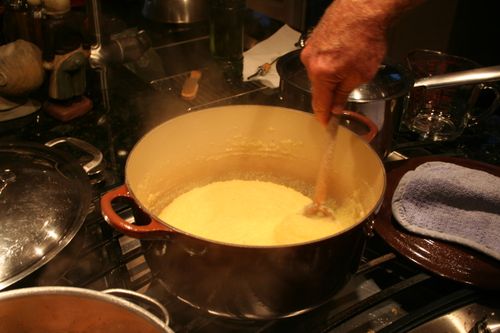 John cooked the polenta, using Marcella Hazan's recipe from her Essentials of Classic Italian Cooking. This is a great cookbook, by the way. Someday I'd like to cook my way through it, in the style of Julie & Julia. I never seem to get past the first few pasta sauce recipes, though, since they are so perfect.

I sadly neglected to get a photo of the fresh chanterelles, but here's what they look like.

I cooked the pork chops and mushrooms. After cleaning the mushrooms, I sliced them thickly, then sauteed them in a bit of butter and olive oil until they were just starting to get soft, then added a little white wine and simmered briefly. Meanwhile, the pork chops were cooking, first sauteed, then a little shallot added, then white wine. They braised with the lid on for about 5-6 minutes a side, just until done. Don't overcook pork chops, by the way. We actually prefer them just a tiny bit pink in the middle. If you cook them all the way through, they get tough and chewy. 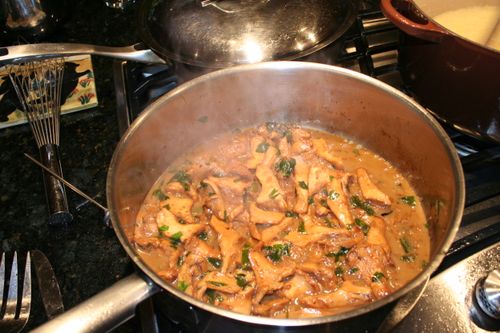 A little chopped Italian parsley went in at the end.

The whole mess went on plates, with some lightly steamed green beans on the side. We also had a salad with fresh heirloom tomato slices, topped with fresh mozzarella and slivered basil, drizzled with olive oil and balsamic vinegar. 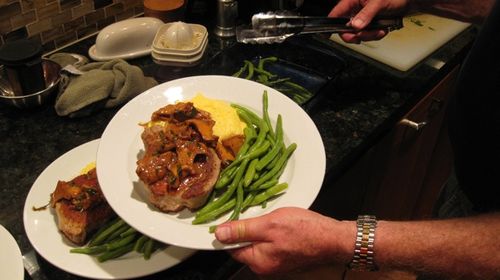 And here's Lewey, pretty sure we might drop something. 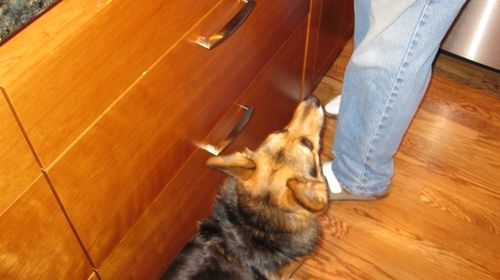 That was the first finished thing. The other thing that's finished is this. 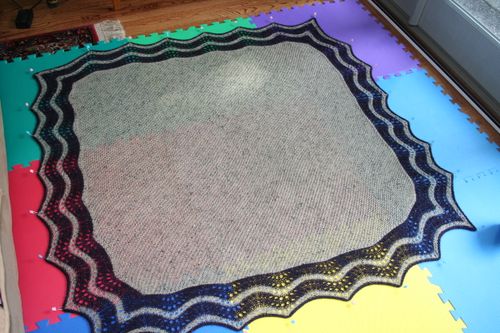 Yes, it does look like sort of a wonky blocking job. It's a baby blanket, for pete's sake. I just mashed it out and pinned it down. More details will follow in a later post. 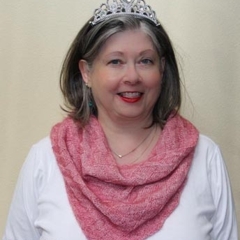 Welcome to my knitting blog! Along with knitting, I'm a spinner, a traveler, and a doctor. Just about anything might show up in this space! Lorette 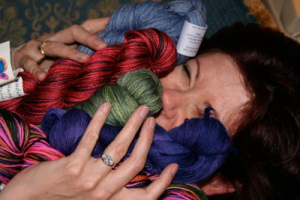